So the car and the bag will have to call it a draw. Fortunately for the Pattersons comprehensive insurance covered it with a pretty low deductible. Nationwide was relatively quick and we got the car back last week, new axle and all. Even more impressively we got the insurance check in the mail the same day we picked up the car!

So just a quick update! we have been busy. Jenny is now only six weeks till her due date. Work has continued to be very busy, we are continuing to forge ahead in our ministry teams, and Connect Groups will be starting up again shortly!! (next week)

Today, while coming back from a Baby Dr visit, the brakes in Jenny's car went out at McDonalds. Great place to loose your brakes, no damage or anything fortunately. However the $$ damage was just beginning. We pulled into the parking lot, ate lunch (I was hungry after all) and then called our extended warranty company. Fortunately they picked up the towing expenses, though as I would find out not the repair. How you ask did my brakes go out? hold on, I can hardly believe this... 2pm I'm working away (yes still on that big robotic machine) and I get a call from the Ford service department. He says we found the problem, your brake line was severed.... AND your front right axle was bent!!! Its going to cost 1179$ to fix! I ask well will the warranty cover it? He says he needs to do some more research, and will call me back.

2:30pm Ford service guy calls back, he says your not gonna believe this.... so you must have run over a plastic bag.... it wrapped itself around the axle and break line, and as the wheel turned it winched the brakeline into the axle, severing the brakeline, and warping the axle. And no, warranty won't cover it; however insurance may.

So poof just like that some plastic bag that probably breaks when I put my jug of milk in it does almost 1200 dollars in damage to our car!!! The bright side is that at least it didn't fail while doing 80 down the interstate. God is keeping some eye out for us.

Anyway we called the insurance co and they assigned an adjuster but we haven't yet heard from them.

Third Ones a Charm?

So another year has passed. Still am not managing to update the blog as well or often as I should like. In the run up to Jordan's Birthday this year jenny and I have both tried our hardest to exhaust ourselves! Between construction, baby prep, cleaning and assorted drs appointments (7 in the last 3 weeks) we have been busy as all get out. On the brite side Jordan's new slide got finished just in time for her birthday (11am for 11:30 party!) Jenny got the house clean, and I think everyone had a good time (well except perhaps Judah, but who can blame a 6 year old boy forced to endure a party of 3-6 year old girls.)

A big thanks goes out to everyone who made it such a good time. Especially those who didn't complain about my "flame kissed" hamburgers.

I Actually got a couple decent pictures put up for the first time in a while: Birthday Pictures

Guess thats it for now. 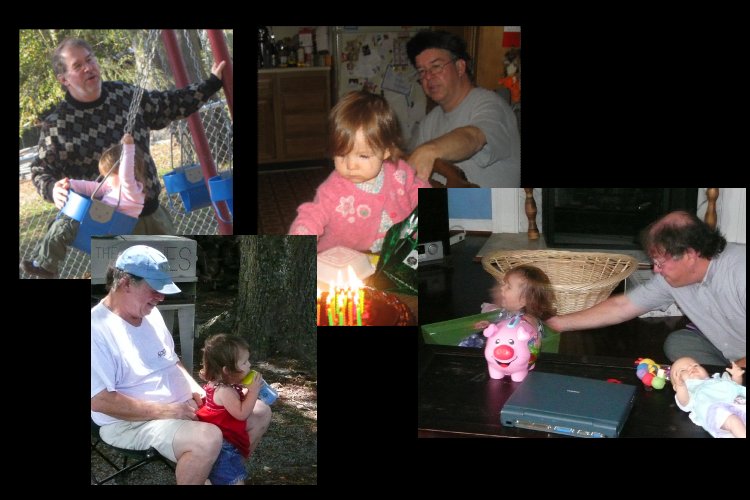